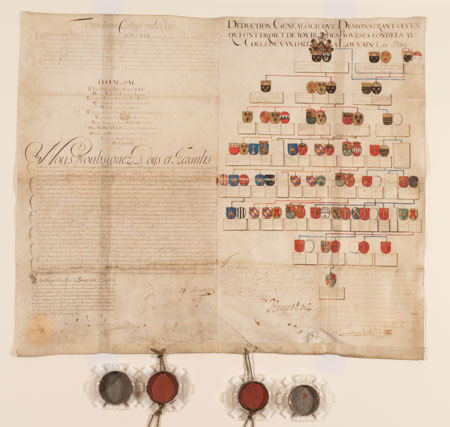 Administrations at central, regional and local level have left behind particularly rich archival holdings from the Early Modern Times. Registers are typical for this period: archival items in the form of books in which documents or data (about revenues, persons, etc.) are recorded. A great many of these series of registers only have a formal description (type of document and dates) but contain plenty of information about persons, places and different topics not mentioned in the catalogue.

As the precise ending of the Middle Ages is sometimes difficult to determine, you are advised to also have a look at the overview of sources from the Middle Ages available online.

For a complete overview of all digitised archives from the Early Modern Times that can be accessed online click here.

The almost entirely digitised archives of this special court set up in 1567 by the Duke of Alba to punish the instigators of the iconoclasm, is a treasure trove of information about the early years of the revolt.  Both the case records and the confiscation files are sorted geographically, which significantly simplifies search queries.

Detailed tax assessments from hundreds of villages in the Spanish Netherlands dating from the troubled years of the revolt have been preserved. The quality of the information contained is variable and some documents are damaged, but these tax registers nevertheless allow us to form a picture of these villages around 1570. The documents are sorted by region (see catalogue pp. 84-89).

As highest government body the Privy Council played a key role in all matters of state. Its advices on numerous matters took the form of so-called consultations that were submitted to the sovereign or his representative. The issues the Privy Council dealt with ranged from all sorts of  grievances to petitions for mercy and assignments. A detailed finding aid is available for the period 1621-1646.

Judgement registers of the Great Council of Mechelen (1475-1794)

For centuries, the Great Council of the Netherlands at Mechelen was the highest court of justice of the (Southern) Netherlands. The registers of dicta (judgements) contain the records of thousands of legal cases heard by the court. These were mostly appeal matters that had previously been sentenced by a provincial justice council or another type of court.

Judgement registers of the Council of Flanders (14th-18th century)

The hundreds of judgement registers, resolution books and ‘registers of criminal investigations’ form the backbone of the archives of the Council of Flanders, i.e. the justice council of the eponymous county. The resolution books (1580-1785, nos. 164-170) contain the decisions (resolutions) taken by the councilmen regarding the general functioning of the Council. The series of judgement registers dates back as early as the fourteenth century and contains the texts of the council’s judgements (1370-1649, nos. 2327-2605). The registers of criminal investigations hold thousands of interrogation reports of criminal cases (1570-1793, nos. 8557-8596).

Matriculation registers, accounts and acta of the old university of Leuven (15th-18th century)

The archives of the old university of Leuven, which was for centuries the only higher education institution in the Southern Netherlands, are an excellent basis for research into the careers of students and professors. In this regard, both the matriculations and the accounts of the university collector and of the faculty registrars also constitute an interesting source.  Via the search engine “Search persons” all names recorded in the matriculation registers can be found. This is a good starting point for more thorough research in other archival series. The research guide can help you to find your way, among others in the important series acta universitatis containing the reports of the university board assemblies and the acta facultatis containing the reports of the faculty management.

Citizenship registers, orphan registers, and deeds and contracts of Kortrijk

This series of 175 volumes contains documents about how the city council supervised the property management by the legal guardians of orphans (nos. 1-170, 175-179). The “Parckemynen index” (no. 171-173) provides a list of the orphan registers from the period 1501-1793. This series of sources is of key importance for Kortrijk and the surrounding villages in the castellany of the same name.

Between 1413 and 1796, the names of the people being granted citizenship  (inside and outside the city gates: binnenpoorter/buitenpoorter) were recorded in these registers. Kortrijk had the largest citizenry outside city gates of Flanders. These registers are therefore a key source for genealogical research regarding both Kortrijk and its wider surroundings.

The “deeds and contracts” recorded in the aldermen registers of the city contain copies or summaries of all sorts of agreements between private individuals. These private-law deeds could be debt acknowledgements, marriage contracts, letters of guarantee, sales agreements, donations, transfers of rents, and various other kinds of agreements.

The population censuses of 1666, 1686, 1709 and 1754 in the archives of the Fiscal Office of the Council of Brabant are key sources for demographic and family history in the old duchy of Brabant. Especially the 1754 census to which the nos. 409-410 of the Estates of Brabant must be added for Brussels, provides a wealth of information about the population and the occupational structure.